Everywhere you go across metropolitan America, the automobile is ubiquitous. In suburbia, half of the developed land is devoted to car parking. In dense cities like San Francisco, streets consume 25 percent of the city’s land area – more than all of its parks. In 2007, author and architecture professor Shannon Sanders McDonald published a deﬁnitive book on the evolution of the American parking garage. Car parking, she concludes, is the urban planning issue of the modern era.  As population growth is focused in cities, and as citizens vie for scarcer and scarcer land, the multi-level parking garage is emerging as a modern elixir. By using structured parking, cities can reclaim land that can be dedicated to improving urban life in other ways. The garage’s rising prevalence—and popular interest in a better urban environment overall—are yielding new garages whose style lifts their substance.  “The California building code now requires that garages have electric-vehicle charging stations, designated spaces for carpool and vanpool vehicles, and motorcycle and bike parking,” said John Purinton, a principal at Watry Design Inc., a parking planning ﬁrm. Purinton has been designing garages since 1991.

“Photovoltaic arrays are now installed in a third of the projects we design; ten years ago, it would have been one out of 50,” he said. “We are now seeing that most owners and most public agencies want LED lighting, which is much more eﬃcient with regard to the amount of energy it uses.” Newer garages are being built with rooftop gardens, urban oases where people can lounge or work outdoors. “Garages are becoming engines of sustainability more and more,” said Wright Sherman, an architect and principal at WRNS Studio, which has focused on garage design since the ﬁrm’s founding, nearly a decade ago. “They tend to be huge water collectors that can concentrate water, so they will come with a whole set of bio-swales, or send water to green spaces around them.” Garages are becoming multi-use buildings with shops and restaurants along street fronts, or to serve as a locus and host of diﬀerent modes of transportation. Stand-alone garages are conceived as architectural expressions, whose relationship with other buildings, the street, pedestrians, and users matter. “The garage as a standalone form also can be liberating,” said Sherman: “Aspects like the skin of a garage are uninhibited by things like waterprooﬁng, so it allows them to be free of their context.”

Precast concrete manufacturer Clark Paciﬁc has developed a parking structure expertise over the past decade led by owner and co-president Don Clark. Over the last two years his teams have helped complete concrete parking structures and cladding for garages at the San Diego International Airport, multiple structures at Stanford University and University of California at Davis, medical center campus.

“One of the unique features our structured garages oﬀer is an option to incorporate a precast hybrid moment-frame as part of the structural system. This is a unique system designed to “self-right” the structure after an earthquake,” Clark said.

“Structures built using this system are designed to be immediately occupiable after seismic events.” Clark Paciﬁc uses the same resilient frame in design-build oﬃce and other building types as well The precast process allows the company to integrate virtually any ﬁnish into its exposed surfaces, including colors into a  mix, and intricate detail in the precast forms and to integrate stone, tile, and other materials. The outside surfaces can be textured for a reﬁned ﬁnish.

For the parking garage owner, precast parking solutions have much to oﬀer: unmatched speed of construction (with signiﬁcant time savings), least impact to construction sites, and ﬂexible integrated architectural cladding options. Additionally, long-span structural precast systems mean fewer interior support columns are necessary, which gives users increased visibility and a safer experience. As California becomes more densely populated, and urban space is constrained, precast construction systems will minimize site disturbance. Precast construction methods do not require as much open, adjacent space as cast-in-place construction. This is because precast systems do not require on-site installation of wood or steel forms or lay down area to store those systems. California’s growing urban population has increased the need for eﬃcient and sustainable multi-level parking garages. Companies like Clark Pacific, whose precast concrete systems are designed and installed with these issues in mind, are at the forefront of a trend to provide better parking solutions. 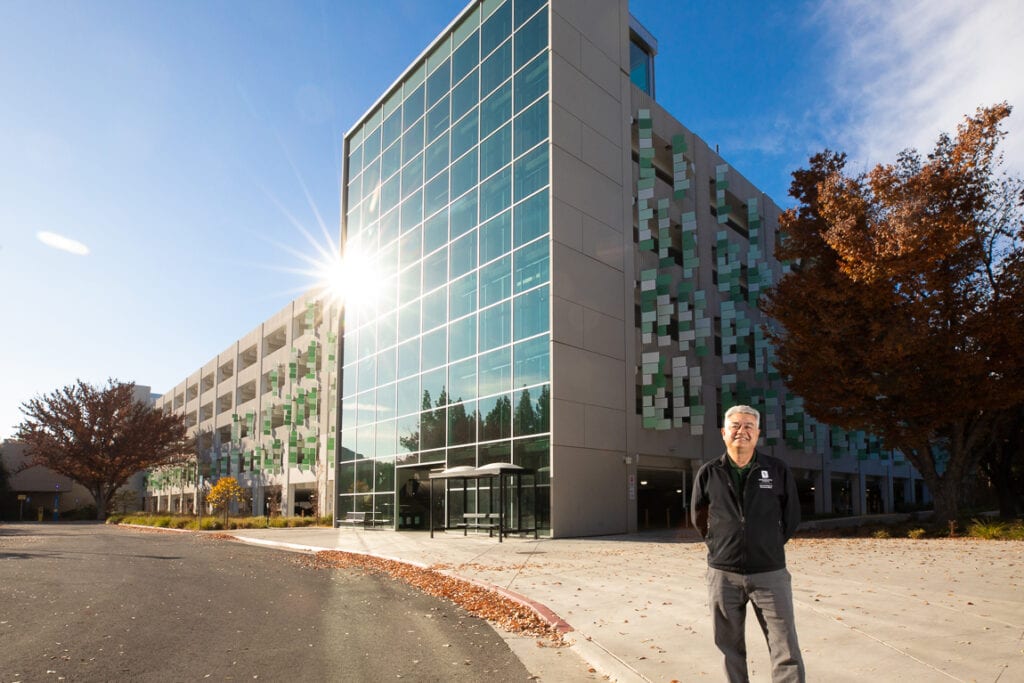